The image below is the most popular: "Night and Day 2002". It has been shown at least 5 times. Click the link below to see one of its appearances.

Another piece was used as "wallpaper". Click below to see a clip. 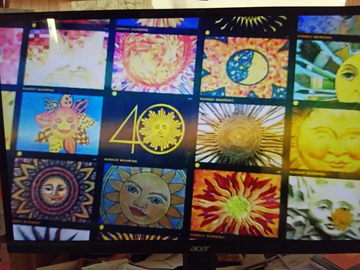 These are 4 of the other 5 images used (if available, the link to the clip is next to the image):

Show with a Jennifer Lopez sun

I and/or my art has been featured/reviewed/mentioned/shown in the following publications/broadcast or cable shows*:


Akron Life
Art of Living with Diana Ray (now-defunct cable show, originally aired Fall 2009)
Here's a 2-minute clip from my appearance on the former Diana Ray "Art of Living" cable show.
It features my work at the now-defunct Made in Akron store. 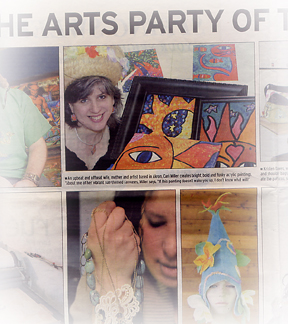 Spotted in Akron Artwalk video
The Akronist created a video from May 2012's Akron Artwalk which does a great job of conveying the spirit of the area's artists. If you look closely, you'll see three shots of me and/or my work.

November 2011: The Akron Art Museum liked a painting I had done of the museum so well that they had ornaments created with the image; they also used the image on promotions for Holiday Mart and included the ornament in the showcase celebrating the museum's 90th anniversary.

I've been in more than 50 shows (solo, group and/or juried) throughout NE Ohio.