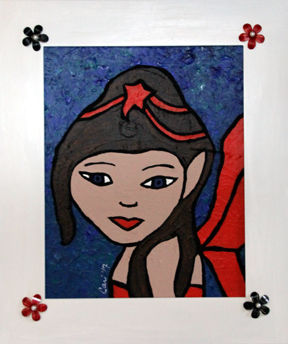 "Madison Avenue", 14"x11" acrylic painting with found objects on stretched canvas, 2011, $55. A piece satiring the idealization of women, especially on Madison Ave. (all the advertising).
"Spring and Summer in Fall", 20"x16", stretched canvas, $65. I named it this because I used bright colors (spring and summer) in the background and under the woman's skin (which I overlayed with a semi-opaque paint) but the woman's hair is all gray, which shows she's in the "fall" of her life. A person may be be older, but all the past experiences of their life are always a part of them, and around them.

*"Destination Anywhere," 8"x10" on canvas board, framed, 2008, $45. Doesn't everyone feel like running away at some time or another? And it doesn't even matter where? Hence ... "Destination Anywhere".
*"411 Overload", 8"x10" on canvas panel, 2008, $35. This painting was done early in 2008 in the midst of the media bombardment of the presidential primary election, economic downturn, etc. It was my to show how I felt: information (or 411) overload. I pasted words from the newspaper inside the figure's head to signify the way my head was spinning with all the news around me. I just wanted it to "Stop!" 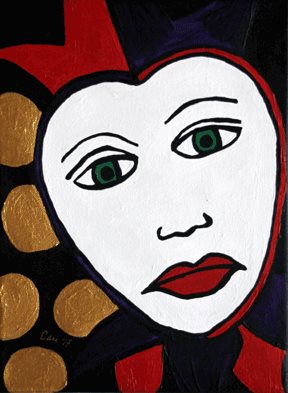 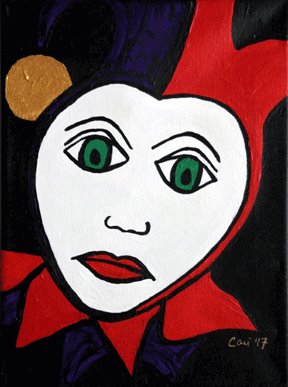 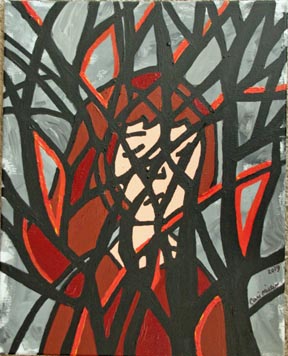 *"Summertime", 8x10 original acrylic painting on canvas board with painted frame, 2003
This painting was a simple expression of how people, especially children, welcome summertime with open arms. Parts of the painting actually continue onto the frame, which added to the sense of fun.
"Woman", 16"x20" acrylic paint on stretched canvas, 2012

"Girl, Magenta", 6"x6" on ceiling tile sample
"Written All Over Her Face", 5"x7" acrylic painting with found objects on canvas board, framed, 2011

"In a dream", 8"x10" acrylic painting with found object on stretched canvas, 2012
"Surprise," 11"x14" on canvas board, framed, 2010. Don't you hate when you are caught off-guard, not looking your best? And worse, when a photo is taken of you at that moment? And worse than that, your picture is put on the Internet? The omniprescence of cameras and camera phones doesn't allow anyone privacy anymore. 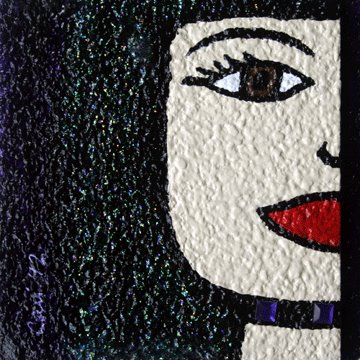 *"True Love", 16x20 original acrylic painting on stretched canvas, 2010
This painting is based on a photo of my husband and me. I decided to go a new direction with this piece, as you can tell! The piece spells out the word "True" and the letters "L-O-V-E" are hidden in the color blocks behind the outline (you have to use your imagination a bit!!)
"At Peace", 8x10

"Baby Love", 10"x8" on stretched canvas, 2010. The original piece was once on exhibit as a jellyfish titled "Heading Home". However, I was never crazy about the piece so I decided to change it. The problem was I had a jellyfish "head" with glitter and puffy paint on it that I had to work around. I thought it looked like half a shell, so I decided to paint the other half of the egg shell and paint a chick coming out of it. That didn't seem quite right, aso I kept thinking about it until I came up with the idea of a baby boy coming out of the egg shell, surrounded by a fun graphic pattern.
*"Mama", 11x14 original acrylic painting on canvas board, 2009, Private Collection (prints only)
I love this painting. I modeled it on a photo my husband took of my older daughter hugging my belly while I was eight months pregnant with my youngest. To me, it perfectly captures the love between us and I always feel warm and fuzzy feelings when I look at it.

*"Female Fantasy No. 1," 8"x10" on canvas board, framed, 2008. At one point I thought it would be fun to do a series of paintings of (wholesome) female fantasies, starting with a husband (the wedding ring is foil) reading an instruction manual. The funny thing is, my husband actually DOES read instruction manuals. I'm the one who tries to muddle my way through things, breaking them right and left!
"That Girl," 8"x10" on stretched canvas, 2010. This is a girl/woman who is rocking her own style and doesn't care what other people think, even though she knows they talk about her behind her back and refer to her as "that girl". 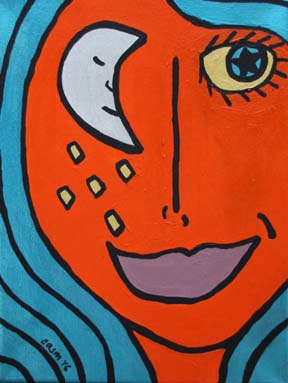 *"Doll", 8x10 original acrylic painting on wood art board, 2009, Private Collection (prints only)
This painting is based on a photo I took of my oldest daughter, nearly two at the time, holding her favorite doll (appropriately named “Green Doll”). The doll pretty much looks like she does in real life, but I changed my daughter to make her more universal. Because few things are as universal (and precious, and sweet) as a girl’s love for her favorite doll!
"Cosmic", a collaboration between my youngest daughter and me.

This was my first FoUNd & Fresh piece. It started with goggles – I had had a couple pairs of broken ones for a while and couldn’t wait to paint someone to wear a pair! Then I just searched around for other things that I could turn into sea creatures. I wasn’t sure if this boy were under the sea himself, or if he were just a goofy kid with wild hair wearing goggles on the other side of a tank. I guess it doesn’t matter. I just think it’s fun!

No good game pieces go unused, that’s what I always say. This piece was inspired solely on the fact that this was the only good net left over from our “Elefun” game. I had just finished the piece “Under the Sea” and thought it would be fun to use the same boy trying to catch butterflies (do kids even do that anymore?). As I had the pieces laid out on the canvas, one of my daughters suggested I have a butterfly in the net. At first I thought it would be cute, then I realized that like the dog in A Friend of Mine I didn’t want this poor butterfly forever caught in a net. 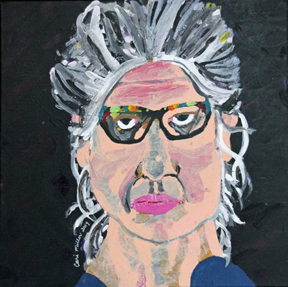 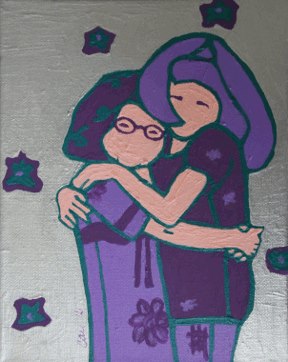 Self-portrait 2019, acrylic on 12x12" canvas
"Sisters in the Garden, 2009", acrylic on 8"x10" stretched canvas, 2016, NFS. This is based on a photo I took of my daughters at the Cleveland Botanical Garden. This was when they were really close and I'm glad I could capture this special time. I only used 4 colors in this piece. I limited the colors to show that as different as the girls are, in some ways they share a lot.