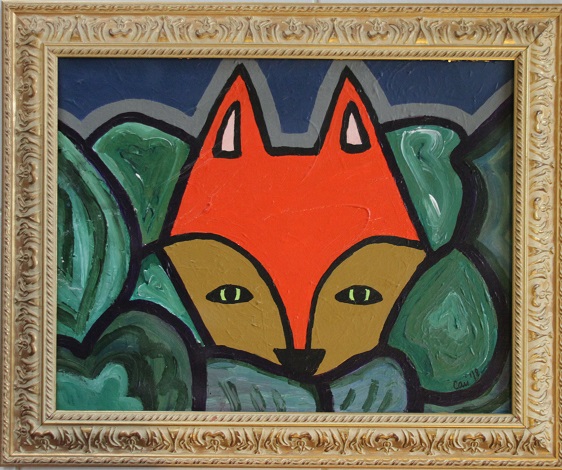 "Ambush", 2018, acrylic, 14"x18" framed, $70. For many years this was an abstract of a butterfly amongst leaves; it was called "Freedom". But I never quite loved it. So I decided to pretty much use the leaves, but paint over the butterfly, then paint more leaves to make it look like the fox were hiding. The leaves are a mixture of colors, while the fox and the sky are very graphic. I called it "Ambushed" because it looks like that's what the fox is going to do.

Prick, 8"x8" on stretched canvas, 2010, $40 I had bought a huge grab bag of nearly useless “stuff” which included lots and lots and lots of leather-making supplies. I asked around; no one wanted them. I thought there had to be something I could think of to do with them. Then I had it: a hedgehog! And don’t we all know a person who’s like that -- you know, a bit, well, prickly? 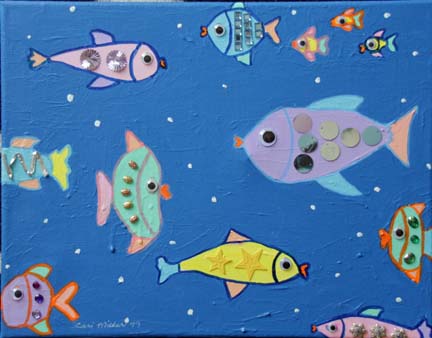 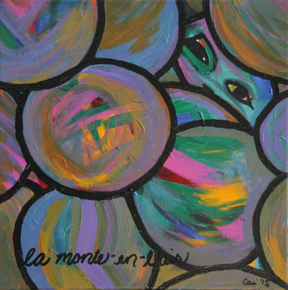 "Dark Days", 8"x10", 2017, $40 on stretched canvas.  It seemed that after the 2016 presidential election I was seeing a lot of blackbirds. I looked up their meaning and I didn't find anything cheery; it was all about doom and gloom and dark days, which is what it feels like under the current administration.

"I mate for life", 8"x10" on canvas panel, in a modern white frame, 2011, $45. This was originally a traditional painting of a seahorse I had done for my mom, who later returned it to me. I kept the seahorse subject, but repainted it more stylized.

"One Crazy Summer", 16x20, stretched canvas, 2010, $65. The main body is made up of circles I clipped out of photos I had taken in summers past. The white lines above the frog's head signify all the running around I do every summer. That's why it's "crazy".

"Mister Mister", 8"x10" on canvas panel, in white modern frame, 2010, $50. A woman at work asked me to paint "anything" in my style. I painted a bird. But I hated it, so I painted her something completely different. Later I went back to the bird and painted this stylized bird over it and was much happier.

"King," 11"x14" on stretched canvas, 2010, $45. My oldest daughter loves loves loves lions, so I made this with her in mind. My first attempts looked nothing like a lion. Nothing. Then I looked for cartoon images of lions on the Internet to see what I was doing wrong. Very helpful! I still struggled a bit, especially on the eyes. And the tail; I didn’t want it to take all the attention. After all, it’s just a tail. Funny thing: originally I thought the lion would be just a face, placed horizontally in front of the green and brown vertical stripes (the stripes were supposed to symbolize trees and jungle). I had to turn the piece vertically (and it ended up being a whole lion, albeit with a very small body!) so the stripes are now just a design element.

"Baby Elephant Walk," 10"x8" on stretched canvas, 2010, $35 I named this after the Henry Mancini song of the ‘60s. I remember my dad playing the song on an album in the living room while my best friend and I laughed so hard we were crying. Hey, we were 12; girls that age can find even the most random things hilarious. 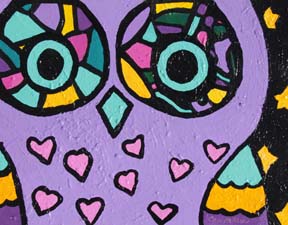 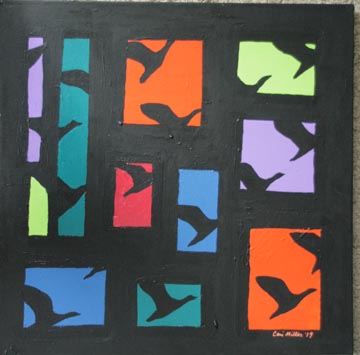 Sold (contact me for prints; also, some images are available on postcards and/or notecards (please see my Etsy shop)

"I talk with the moon", 24"x20", acrylic paint with found objects on plywood, 2012. This was inspired just by looking at the what the lines of the scrap plywood wanted to be -- obviously an owl in a forest of trees. I also like to repurpose items, and these little pieces of wood made perfect feathers. It was so named because of course owls talk to the moon; who else would they talk to?

Guardians of the Night, 16"x20" on stretched canvas, 2010. This piece was inspired, simply enough, by looking at two old CDs and thinking they looked like the eyes of an owl. I also used pop can tabs and beads. I liked this piece so much I was going to keep it unless someone bought it the night of a trunk show. Well, sure enough, someone bought it that night. But I knew she was going to give it a good home.

"Monkey Shines", 16"x20" on stretched canvas, 2011. This was originally going to be something else which I didn't like, so I basically dumped green and white and gold paint all over the canvas. Then I looked at what it wanted to be and it told me a purple and green monkey. I literally threw little gold beads on the paint to hopefully stick, painted the monkey then glued some other scrap materials on it. I named it "Monkey Shines" because it looks like the monkey is up to something (monkeyshines) AND because the gold makes it a monkey that shines. I remember I was working on this piece at my studio and a customer saw it and wanted to buy it the minute it was done. BTW This is another favorite of mine!

"A Friend of Mine," 14"x18" on stretched canvas, 2010. I used plastic puzzle frames, pieces of children's games and other odds and ends to make "Pal". I named him "Pal" because my deceased grandmother would always talk about the dog "Pal" she had.

"Love Connection," 11"x14" on canvas board, framed, 2010. More of those plastic puzzle pieces, regular puzzle pieces and more. You can look at them as two separate giraffes, or two intertwined giraffes (one yellow, one peach). I called it "Love Connection" because in either way the love between these giraffes is obvious, and they are definitely connected.

"Hoot," 11"x14" on stretched canvas, 2011. This was another piece that sold very quickly; the first night I put it out for sale at my former studio. I was never nuts about it because as you can see the feet and books are slanted. If I hadn't sold it that night I would've taken it home to fix it. As cute as the idea was, everytime I look at the owl it drives me nuts. This owl was made with seashells, bottle caps and more.

Dayton, 5"x5" on a ceiling sample, acrylic paint and "found" items, 2012. Another cute owl made on and from a mishmash of items. Named after one of my children's stuffed owls.

Step Lively, 7"x5" on canvas board, framed, 2011. Used drink stirrers for this. The bright colors made me think of a jazzy cat, in a hurry to hit some clubs.

Funky Chicken, 8x10 original acrylic painting on canvas board, 2003. This piece was commissioned by a woman who wanted a painting of a chicken in my style for her mom. On the first go-round I had a pretty traditional white and red chicken. But I couldn't let it go at that, because it wasn't funky at all. Out came all the colors, and voila, funky. I think the piece is so cool, even though I didn't realize until after I finished it that it's a ROOSTER, not a chicken (I'm a city girl). But alas, the woman's mother did not like this at all. Fortunately, the woman who commissioned it did, so now it's in her house!

Those Eyes, acrylic paint and "found" items on a ceiling tile sample, 2012. Oh my goodness, ANOTHER owl.

The Caterpillars Three, 24"x18" on stretched canvas, 2010. The white plastic lids to yogurt, cottage cheese, etc. inspired me to create a caterpillar from them. Once I laid it out, however, it didn't work for me. So I played around with items until I came up with this whimsical piece.
Parenthood, 14"x11" acrylic paint on stretched canvas, 2015. My second, and probably last, dragon painting. The first one was "Motherhood"; this one is "Parenthood" as you have two creatures, vigilant, keenly aware of all the obstacles (the background) that parents face. 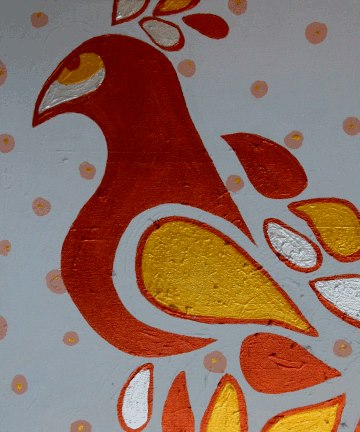 "Motherhood", 14x11", acrylic on stretched canvas, 2015. This is the first time I've drawn, let alone painted, a dragon in my life. I was just looking for something different. And mothers are fierce and protective and beautiful and complicated and full of love which may not be readily seen (note: the pattern on the body is upside-down hearts).

Athena, 11"x14" on stretched canvas, 2012. Athena is my favorite of the Greek gods and goddesses. She's the goddess of wisdom, courage, inspiration, the arts, etc. etc. and is believed by some to have been an owl. 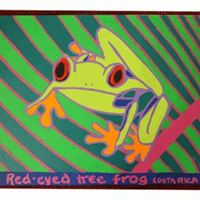 "Be Like the Turtle," 12"x9" on stretched canvas, 2010 This piece came along rather slowly, starting out rather plain (just green puzzle pieces and bottle caps) on a blue and white striped background. As time went on, step by step it began to get more complicated. I ended up with some odd space on the canvas (I had to use a 9”x12” panel because an 8”x10” wouldn’t contain the turtle). So I looked up quotes about turtles and thought the one I found was perfect -- the turtle may not look like others, but he’s okay with it (I took the phrase “at home in its own shell” more figuratively than literally).

"Pepper (the best dog ever)", acrylic on 12"x12" stretched canvas, 2015
"Poochie", 8x10 original acrylic painting on canvas board, 2003. I love the shades of brown and purple, the heavy texture and the expression on the dog's face. Haven't we all been in the doghouse like "Poochie"??

*"Saturday Afternoon", 11x14 original acrylic painting on canvas board with painted frame, 2003
This is a fun piece, which to me looks like a cat spending "Saturday Afternoon" staring at the fish in an aquarium. I actually painted fish on the white frame as well for the original piece. I love to look at the interplay of the colors and the texture.
"Kitty", 5.5"x10.5" on a ceiling sample, acrylic paint, 2012

Collaborations with my youngest daughter

This document has been edited with the instant web content composer. The online instant HTML editor tools make a great resource that will help you a lot in your work. Save this link or add it to your bookmarks.